As the third and final contribution from allonymbooks to the Magical Realism Blog Hop, Evie Woolmore interviews fellow magical realist and spiritual author Leigh Podgorski about her influences and how her experiences have shaped her writing.

Evie Woolmore: Readers of Desert Chimera may not realize that it was originally created as a play. Indeed, they may not appreciate how prolific and talented an artist you are across a range of art forms. Why do you work in different media and how do those different outputs influence each other? 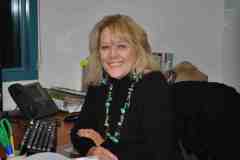 Leigh Podgorski: Though I have written short stories and dabbled in some poetry, the main media I have worked in is screenplays, stage plays, and novels. Different media demand different discipline. There is nothing like crafting a screenplay to teach the craft of economy, the art of lasering in to the high point or the very “kernel” of every scene you create. In a good screenplay there is no fat. Stage plays teach you how to craft dialogue and character behavior. If you cannot tell your story through behavior and dialogue you have no play. Both of these formats have rather strict rules and time limitations. I trained in the theatre and spent many years practicing the craft as an actress, writer, director and producer. I love the American master playwrights: Tennessee Williams, Eugene O’Neill, Clifford Odets, and Arthur Miller. The theatre is a community, collaboration. There is no discipline on earth that can duplicate the thrill of performing or having your words performed before a live audience. Of the three disciplines, however, novels are the freest of all forms. With the novel, there are no rules, no set format, and unless you are co-writing, no collaboration. There is you and your universe, as you populate it, as you create it. You can zoom inside your protagonist’s head, and turn around and zoom into your antagonists’; you can lead your audience back a thousand years or forward 10,000; you can create a whole new planet, a new country, a new county or city; you can even kill and resurrect if, and this is a very big if, you take your reader along for the ride, if you create a universe your readers believe in. In the theatre, if an actor breaks the fourth wall, that is the imaginary wall that separates the actor from the audience, the magic is broken and the audience is lost.  In a novel, if the author is unfaithful to her universe, if she writes something that causes her reader to no longer believe in the world she has created, the author has broken the magic, she has shattered the illusion, and the reader is lost.  In the end, whatever discipline I have worked in, I have learned that it is all story.  I am a storyteller.  Will my readers come along with me for the ride? Having worked in different mediums has enabled me to call on a variety of different skills to build my story universe and to check it for resonance and stability. If I am false, if I break the magic, my audience will tell me. My audience will be lost to me.

EW: That diversity also reveals itself in your fiction, for Desert Chimera and The Women Debrowska are extremely different books. Many have argued that publishing directly to Kindle and other e-book formats frees authors from the tyranny of having to stick to one genre, so I’m interested in how indie publishing has helped you as a writer?

LP: I have spent a lifetime as an artist; as an actress, writer, director, and producer. Most of that time has been spent in the theatre, and save for some extremely bad video recordings of plays, there is no lasting record of my theatre productions in any of the disciplines above except for typed manuscripts of my plays. I do have a film I wrote, directed, and produced that I adapted from my play entitled We Are Still Here about Cahuilla Elder Katherine Siva Saubel. From the time I began writing, and this includes stage play writing and screenplay writing, I remember hearing the argument: Do you write what you love, or write what sells? And of course there was the companion argument that an author must establish his or her “brand” in order to be able to market oneself. We have all heard the stories of well-known authors who write under pseudonyms when writing outside their genres. What the advent of Indie Publishing has done for me addresses many of these issues. First, Indie Publishing has enabled me to create a lasting record and product, for I am publishing not only e-books but print books as well. However, even as a Kindle and e-book publisher, Indie Publishing has enabled me to establish a growing Internet presence. With the technology available to us today, e-books can be quite stunning in design, as can Author’s pages. Marketing one’s work is not easy; it is often as consuming, if not more so, than writing, and writing is far more fulfilling and fun. When I am writing—as I am doing right now—I am in the midst of completing the third book in my Stone Quest series – I am able to accomplish very little if any marketing and vice versa, especially as I teach as well. There are only so many hours in the day. My goal is to make my presence so visible and my books so lucrative that I can become a fulltime writer with no need for any other job. Indie Publishing has given that dream hope. As for the question of what to write— what you love or what sells? Sometimes what you love becomes what sells. Sometimes what sells becomes what you love. Sometimes—none of it happens. “Hope is the thing with feathers” Emily Dickinson wrote. Indie Publishing has given me lots and lots of feathers. And that is a very very good thing 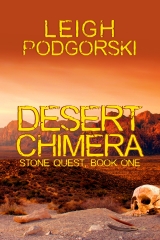 EW: Desert Chimera draws on a wide range of spiritual themes across several cultures. What inspired you to bring these together, first in the play and then the book?

LP: I have been fascinated with the metaphysical as long as I can remember. My favorite authors as a child were Poe and Asimov, and then, when I got a little older, Jung. I conducted research for a book Ouray’s Peak, about the Ute Indians. Their lives are so connected with the Earth and with nature in a way that non-native modern man is not.  I’ve also read a good deal of Tom Brown and his Tracker series; his influence can be seen in the characters of Luke and Grandfather. Armand Jacobi is an amalgamation of Anton LeVay, the creator of the Church of Satan, and L Ron Hubbard, the creator of Scientology. Both LeVay and Hubbard are fascinating men who created vast followings. Their spirituality, especially LeVay’s is dark, but they are charismatic, beguiling characters. I researched Satanism for some film scripts I was writing for a company that was producing horror films, and had read Messiah or Madman the book L Ron Hubbard’s son Ron deWolf wrote about him.  Eppie Falco is drawn from my work with Dr. Elisabeth Kubler Ross whom I interviewed for another play, Windstorm. Dr. Ross was a celebrated doctor who saw visions, communicated with the dead, and who, through her visions, taught us more about, as she said, not how to die, but how to live.  The play Desert Wolf was written about fifteen years ago. I was a member of a theatre company here in Los Angeles, and I developed it specifically for members of the company, one of whom is my husband, actor/director Dave Florek. Going from the play to the novel was very interesting. I had the opportunity to widen the scope and explore the spirituality of the characters far more intimately and deeply. This was especially true for Luke and Armand’s relationship while Luke lived with Armand and the lost boys in New York.

EW: What did writing the book offer you, in terms of exploring that huge range of material, that you couldn’t cover in the play?

LP: One of the largest frustrations I had with the play was the final showdown, the final duel between Armand and Luke in the Desert Wolf Café. No matter how brilliantly choreographed as a stage fight this scene could be, it could only remain a stage fight. Even if one could imagine all the wizardry of a high tech production of Wicked, and Desert Wolf had no hope of ever receiving anything close to a fraction of that budget, if it were to even be graced with a full production at all, when producing for the stage, one is, at the end of the day, limited by reality. What are the limits in a novel? Credulity, solely. Create your illusions sufficiently to entice your readers to believe in your magic, and you can take them anywhere.

EW: Finally, what one piece of advice would you share with other indie authors that you wish you’d known sooner?

That’s a great piece of advice, Leigh, thank you! And thank you so much for giving up your time to talk to allonymbooks.

You can learn more about Leigh and her work at her web site: www.violethillsproductions.com; or visit her Author’s Central Page @http://amzn.to/YomRl1. Leigh can also be contacted via Facebook @ facebook/leigh.podgorski, @ twitter @ twitter/leighpod52.
*****

To read other blogs on the Magic Realism Blog Hop, please visit the other participating writers:

Evie reviewed Leigh’s novel Desert Chimera a few weeks ago. To find out about Evie’s own magical realist novels, please visit her page.

2 thoughts on “Interview with Leigh Podgorski, author of Desert Chimera”