I’m a complete sucker for beauty. Beautiful landscape, beautiful women and men, beautiful stories. I’m old enough to know better than to tell you how old I actually am, but if I tell you I was old enough to appreciate beautiful storytelling when I saw Northern Exposure when it first aired in the early 1990s, then you can figure that out for yourself.

For those of you who have never seen this gem of innovative, creative, just really funny writing that celebrates beauty in all its forms, Northern Exposure is a classic ‘fish out of water’, ‘stranger comes to town’ story. If you’ve seen Bill Forsyth’s movie Local Hero, you’ll get the idea quick enough. Joel Fleischmann, a newly qualified doctor from Queens, ends up in deeply remote and rural Alaska to pay back the costs of his education. Not only is he far outside his comfort zone, but his down-to-earth, Jewish rationality is constantly flummoxed and defied by the apparent absence of rules in this tight knit community; at least that’s how Joel sees it. Everything is crazy, no-one seems to do anything the right way, and Joel is frequently prevented from doing or getting what he wants. He can’t seem to get on anyone’s wavelength and no one seems to share his values.

Against the major driver of Joel’s attempts to survive his isolation are set a number of sub-plots, interwoven with the themes of nature, independence, native American culture, isolation and ‘being your own person’. This last is cleverly set against the strength of the community in which Joel now lives – Cicely, Alaska – for in fact everyone in town has very clear rules of their own, but these are rules which are somehow both synergistic with each other and with the environment, while also acknowledging the fundamental differences and conflicts between the perspectives of many of the characters: Maurice and Holling, Maurice and Chris, Joel and Marilyn, Joel and Maggie.

The native American elements would be an obvious source for spiritual, mystical or magical realist elements, and there is in the series a very strong undercurrent of the continuity of native American spiritual belief as a kind of rule set of its own. What intrigues me as a writer is the way this undercurrent seems to infuse everything, both ‘bending the rules’ of story telling and upholding them. I’m a huge fan of magical realism because it’s all about bending rules, it’s all about saying some stuff is possible even if it defies belief. My own hero Crash Cole is, I guess, a version of Joel Fleischmann because his rational head says ‘this is just crazy’ while he has to learn to live within the ‘crazy’ if he is to function at all. That process of compromise and attrition is kind of fascinating to me, because it’s the opposite of the process of negotiation that goes on between magical realist author and their reader. Readers of magical realism go straight into the premise open-minded and open-hearted, living within ‘crazy’ and embracing it completely from the outset. I guess they are smugly willing the hero on to ‘get it’ too.

A great example of the fusion and (con)fusion of rules Northern Exposure-style is found in the Series 2 episode, “The Big Kiss”. Chris loses his voice to a beautiful woman who is passing through town, and Ed gets help from a 256-year-old native American spirit to find out more about his parents: these are two essentially magical realist concepts. We are ‘permitted’ to accept the native American spirit guide because we can respect other belief systems, but Chris having his voice stolen goes way beyond a belief system. It breaks the rules of rationality, but in Cicely, anything is possible. Perhaps the remoteness helps – surely this wouldn’t happen in a commuter belt town or an inner city?

Yet whether you see these two story strands as similar or contrasting, they are both managed in the episode by elegant references to story-telling. Chris is told stories by two different people in which a hero who loses his voice must have it restored by intimacy with the most beautiful woman in the village. Ultimately, he tries to recreate the story for himself in order to see if it will work for him. Meanwhile Ed reconnects with the narratives of his native American culture: the spirit One-Who-Waits is always telling him stories or fragments of stories, but none of them actually meets Ed’s purpose of learning about his parents. But at the end, when Ed happens upon a man who might be his father, the man tells his own miniature story of his life since Ed’s birth.

We long for Ed to find what he is looking for: the rules of disruption and resolution demand it, and yet we almost don’t get it because the rule-bending of One-Who-Waits’ existence is actually more fun to watch, though our eyes water a little when Ed realises who Smith is. We long for Chris to get his voice back – the whole of Cicely does – but the sexual tension between him and Maggie means that Maggie almost can’t go through with the intimacy required, and follow the rules of the story into which she has been written.

It occurs to me though that magical realism might, paradoxically, give us a chance to ignore those rules altogether. Would we let that happen? Or are we relieved that the very rules that are flouted are also adhered to so carefully? That stories that start must also end. We need resolution, I suppose. We need outcome. But could the rule-bending of magical realism overcome the rules of story-telling?

Cadell Blackstock is the author of the magical realist novel Crash Cole in ‘The Rake Spared’, available through all Amazon sites. He also wrote a blog a couple of years ago for the Blog Hop which he thinks is worth a second read … 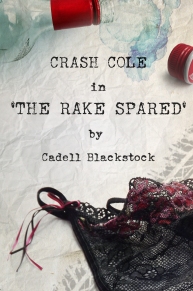 This post is part of the Magic Realism Blog Hop. About twenty blogs are taking part in the hop. Over three days (29th – 31st July 2016) these blogs will be posting about magic realism. Please take the time to click on the frog button below to visit them and remember that links to the new posts will be added throughout the blog hop, so do come back to read more.