As the first anniversary of allonymbooks flies past,  we thought we’d remind you of the excellent novels that have been published by allonymbooks this year. All allonymbooks books are available for Kindle at all Amazon sites.

If you like a contemporary satire with a dark side, look no further than CRASH COLE IN ‘THE RAKE SPARED’ by Cadell Blackstock (Available at all Amazon sites including Amazon UK and Amazon US)

This is a scandalous tale with a supernatural twist. If you like your heroes to be decent honourable men, then look away now.

Crash Cole’s fans love him enough to literally keep him alive. But who hated him enough to want him dead? Just like Don Juan before him, celebrity TV biker Crash Cole finds himself at the gates of hell as a consequence of his dissolute and promiscuous lifestyle. Except this hell is of his own making. Hauled back from the brink of death by the unfettered love of his fans, Crash can now hear every one of their voices inside his head, a chaotic din that obscures his memory of how he nearly died in the first place. Learning to live with it proves more than Crash can bear, and with his body mending at a phenomenal rate due to the healing love of his fans, he goes on the run, aided by Julia, a nurse with a bit of a crush on Crash.

Virtually unrecognisable due to terrible scars on his face, Crash revisits his life and the accident, a voyage of discovery constantly overshadowed by the thoughts of those who wished him live and the silence of those who didn’t. But will he learn the truth before his fate catches up with him?

Love him or hate him, you’ll want to get to know him.

If you like historical fiction or magical realism, Evie Woolmore‘s haunting and imaginative novels will draw you in from the first page. Find out why Read Dream Relax say that Evie is “one indie author worth reading”.

Epiphany and Martha are sisters with a stage mediumship act in Edwardian London. When they are asked to give a private reading at the home of Lady Adelia Lyward to find out the truth about her brother’s death, Martha must face up to her past. For two years ago, her affair with Lord Rafe Lyward ended in pregnant disgrace, and her attempted suicide in the River Thames. But there is more at stake than Martha’s anonymous return, for Epiphany bears the burden of restoring the equilibrium, not just to the Lywards but to her sister and ultimately to herself.

“…simple and beautiful, human and poignant…”   “…mystery, history and a bit of mysticism…” “….it’s one of the best books on the subject I’ve ever read…”

Tom Macindeor is an itinerant English teacher, spending the summer in Warsaw in the hope of finding out the truth about his grandfather, a Polish resistance fighter. But when he hears the voice of Ela, a young woman trapped in the Jewish Ghetto of 1942, a window opens not just on his past but the future of the ghetto and all those who live in it. Should he share what he knows of their fate, or will Ela’s search for the truth about her own family doom them both?

Evie Woolmore’s latest stunning novel has just been published on Kindle, with a fabulous review at Read Dream Relax.

‘I never shoot a man unless there is no other choice.’

The motto of Thelonia Jones, deputy Marshall, makes perfect sense in the silver-mining mountains of Colorado. But back in Victorian England, hoping to settle the debts of her half-brother Cadell, Thelonia finds much that bewilders her. Why has her wealthy stepfather abandoned his mansion to die alone in a rundown cottage by the sea? Who is the strange little girl who brings seagulls and sick people back to life? And why has the owner of the Greatest Freakshow on Earth followed her halfway around the world? For all her ease around matters of life and death, even Thelonia will be surprised by just how high the stakes are about to get. They say the past always catches up with you. For Thelonia Jones, that means literally.

If you yearn to be a teenager again – or are one still – try Flora Chase‘s luxurious young adult historical saga:

The Strattons, the first volume of The Strattons young adult historical saga, is set against the backdrop of the luxurious late Edwardian era, on the eve of the First World War. Four young people, aristocrats and servant, are about to find their safe, comfortable world changed forever. Each must come to terms with the expectations of their class, their gender, and their destiny, and decide whether to embrace them or find the courage to fight against them.

When their diplomat father, the 4th Marquess of Stratton, is killed in Germany, Freddie, Julia and Blanche Matchingham, and their housemaid Dinah, find their world changed forever. Freddie must abandon dreams of university to become the 5th Marquess. Julia is wrenched from the contented obscurity of her books to face the nosy aristocracy keen to marry off her brother. Shallow, sociable Blanche finds her ambitions to take London by storm thwarted by mourning and social restriction. And why is Dinah, the first housemaid, suddenly being sent away from Stratton? The arrival of a German prince and a factory worker will turn all their worlds upside down and each of them must decide what their future holds, and whether they have the courage to face it.

allonymbooks author Cadell Blackstock chips in with a few words of his own about magical realism.

Reading fellow allonymbooks author Evie Woolmore‘s blog for the Magical Realism Blog Hop this week, and surveying the other intelligent and fruitful discussion on the subject, I was struck by two things. One, that the majority of participants in this blog hop are female authors. And two, that when I talk about magical realism to other men they tend to think – rightly or wrongly – of fantasy and magic, more than the realism. Even the guy who cuts my hair – a 30 year old new dad with a serious devotion to beer – has abandoned his customary delight in sharing his favourite zombie movies to tell me about his latest enthusiasm: Game of Thrones. ‘I’ve never read the book – I don’t read books, me,’ he informed me with great pride, ‘but the telly series is magic.’ 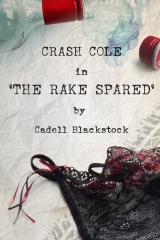 When I wrote Crash Cole in ‘The Rake Spared’, I didn’t want just to write about a failing TV star, ensnared quite literally in the trappings of his own celebrity. I wanted to blast down the walls of privacy that tenuously protect us as individuals. I wanted to push the idea of loving fans to a new level. I wanted to take an actual situation that was covered very prominently in the media (British TV personality Richard Hammond’s high speed dragster crash in 2006) and explore it from a different point of view – the subject, not the observers. In my novel Crash Cole, a motorcycling TV actor (no resemblance to Mr Hammond is intended whatsoever (nor even believable), let me be Absolutely Clear), has a serious accident and wakes up to find that all his fans have literally loved him back from the brink of death. But there’s a price. He can hear every one of their voices in his head.

But there’s no magic wand here. I don’t think it’s a huge leap in imagination to appreciate the pressure that a figure in the public eye must feel at times. Even this very morning, with the birth of the Prince of Cambridge, third in line to the British throne, questions are already being asked about what it will be like for him to grow up in a world of unprecedented public interest. All I did in Crash Cole was to manifest that interest as real, to make the pressure physical, identifiable, tangible.

Some of the bloggers on the blog hop have talked about alternative realism, rather than magical realism. That seems like a good label for what I’ve written. Crash Cole is a contemporary satire on celebrity, sex and scandal. I’ve said elsewhere it has a supernatural twist. Which I suppose it does, if hearing voices counts as supernatural. But for men who would be put off by flowing beards and long swords, I think alternative realism is a good way of describing a funky twist on the world we know.

To find out more about Cadell Blackstock and Crash Cole, visit Cadell’s page.

Crash Cole in ‘The Rake Spared’ is available on all Amazon sites, including UK and US.

To read the other excellent blogs in the Magical Realism Blog Hop, visit these links: